Tie Dye is one of the most enduring trends. Whether you’re scrolling through fashion blogs, in touch with trend forecasts, or simply shopping for a closet refresh, you’re sure to find the phrase: ‘tie-dye is back in style’. 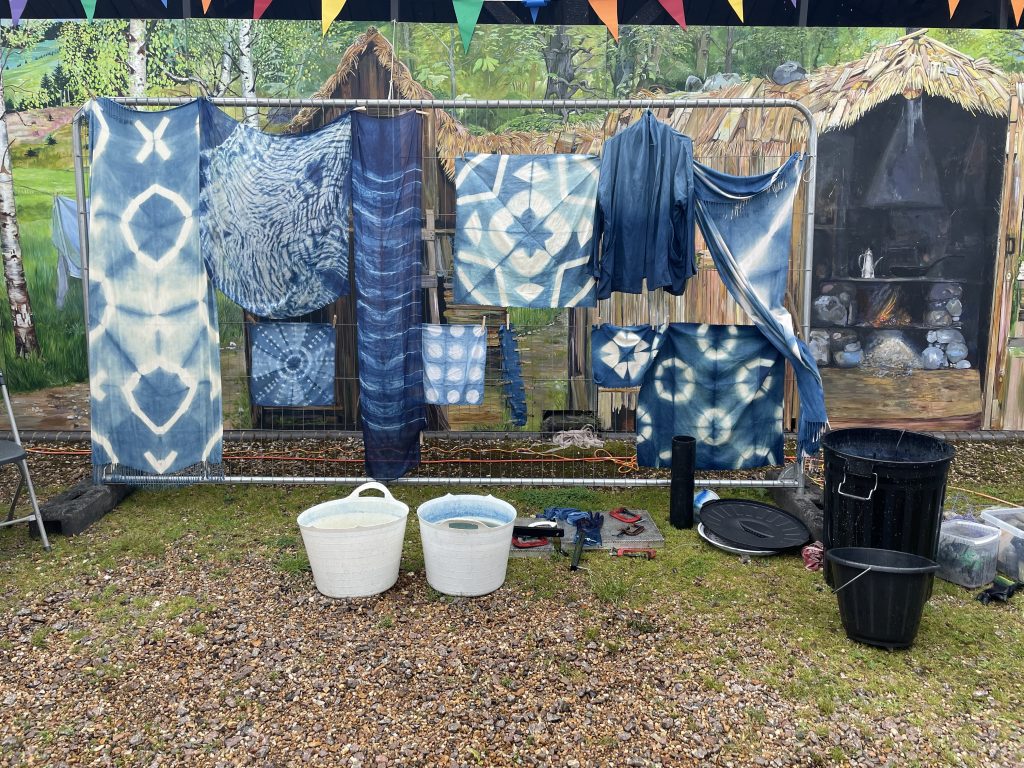 The most recent resurgence came on 2020, when DIY tie dye became a way to beat the lockdown blues. But it doesn’t take a lockdown to bring tie dye back in style. Every time it comes ‘in’, it never seems to go ‘out’ for too long. This is one of the reasons we love resist dye techniques here at Indigowares. Our mission is to create unique and timeless garments— what better way to do this than using the techniques that originated tie-dye? It’s a modern classic, which carries beauty from the beginning of the process to the finished garment. 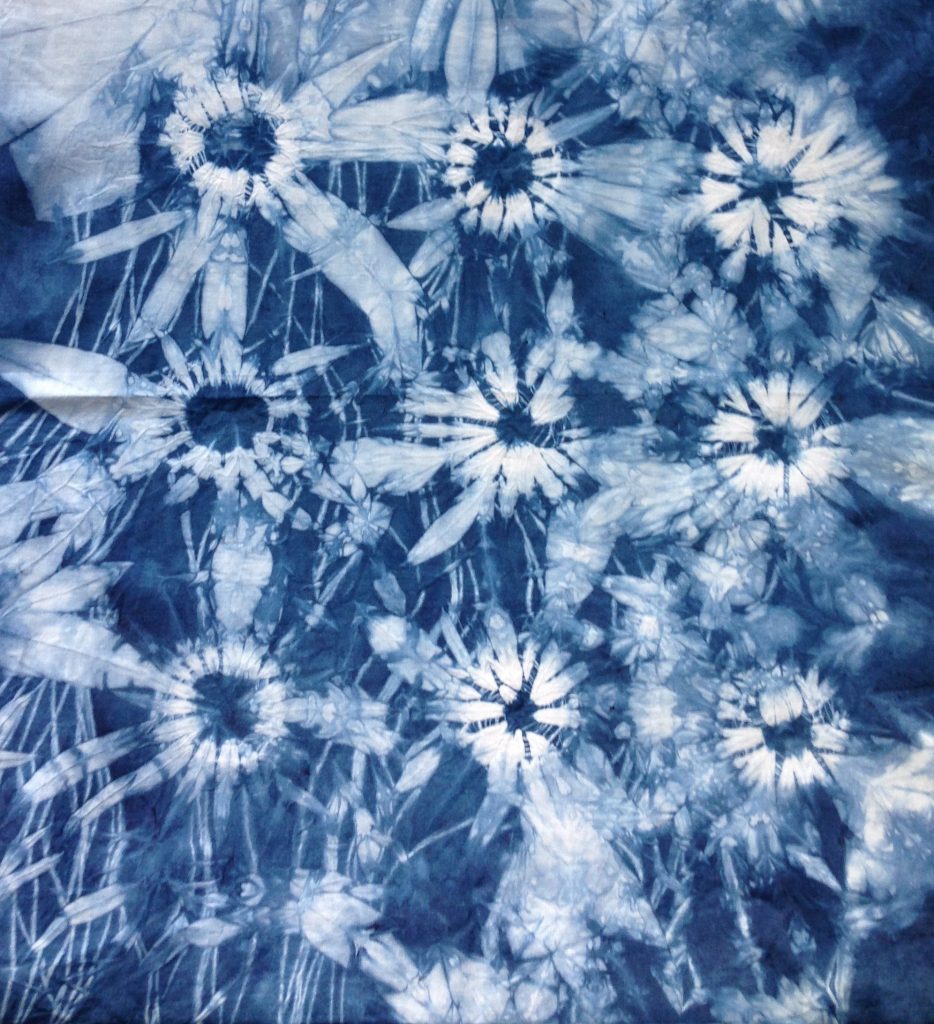 It’s no secret that we’re a big fan of hand created patterned textiles here at Indigowares. This is why we’re so excited to dive into the tie dye trend right here. Let’s take a look at the global origins of tie dye, the highlights of the western tie dye trend, and how you can make your own tie dye garments with natural dyes!

Chances are the phrase tie dye throws you back to the 1960s. Or to DIY tutorials, maybe picking up Rit dye and getting set up in the backyard for a summer DIY project.

But this beautiful method of patternmaking has been around much longer. Millenniums, in fact. There are records of tie dye that date back as far as the Stone age, between 500 to 810 AD in Peru. It’s no wonder tie dye is classic— its deeply rooted in textile history.

There are so many different cultural interpretations of tie dye. Let’s trace its global history to get a full understanding of where the print comes from.

Shibori is a resist-dyeing technique that involves folding, twisting, bunching, clamping, or tying fabric, then dipping it in indigo dye.

It is most well-known as a Japanese tradition, but traces of the technique can be found in many locations throughout history. That first remnant of indigo dye in Stone Age Peru could be considered a foundation of Shibori. Since then, a variety of different shibori techniques have existed all around the world. To name a few:

Plangi is a Malay-Indonesian technique where cloth is bound and bunched before dyed.

Bandhani is the term for a similar Indian process, where the tied patterns are small and intricate, and usually follow traditional designs and motifs.

African tie dyes, on the other hand, are known for brightly coloured and natural resist patterns that often include Ashanti, Akan, or Adinkra symbols.

As you can see, resist dye techniques based in stitching or tying have a diverse cultural history. Which brings us right back around to Japanese Shibori, one of the most popular influences on today’s western idea of tie dye. 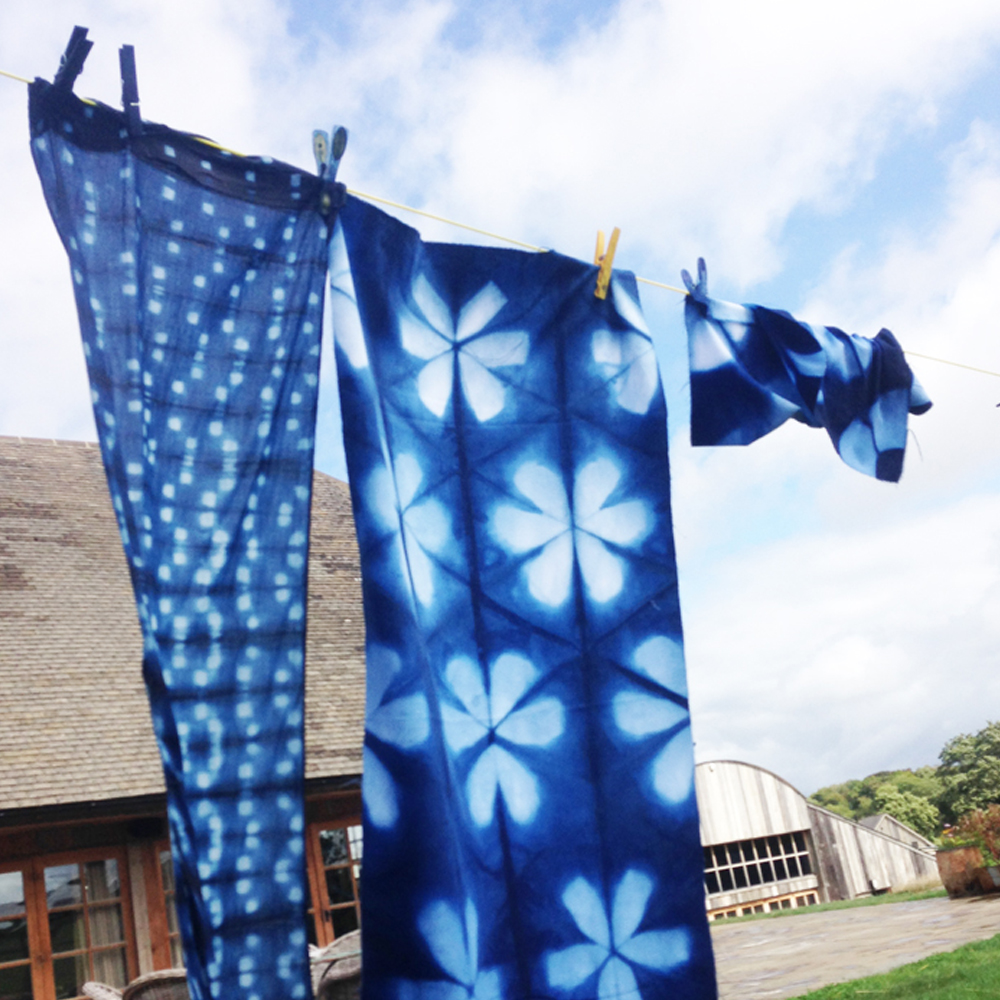 You’ll see Japanesse shibori patterns in many of our Indigowares garments- it’s at the foundation of Indigowares, and we love the infinite possibilities that this technique can achieve.

The actual meaning of the Japanese word ‘Shiboru’ means to ‘wring, squeeze or press’, and encompasses such a great number of techniques that there isn’t an English translation for every method.  ‘Tie dye’ is a term that first appeared in the US in the 1960’s— a simplified term, for a simplified version of global resist dyeing practices.

If you asked anyone to quickly associate a few words with ‘tie dye’, you’d most likely hear the key players: hippies, peace and love, freedom. Dig a little deeper into these words, and you get to the heart of what tie dye culturally meant in the 1960s— tie dye was a symbol of protest. The new uniform of a counterculture that stood in solidarity against war, progressing to a political, sexual, and social revolution that was sweeping the United States.

It wasn’t long before this trend got snapped up by high fashion. In fact, the origins of couture tie dye and modern media intersected recently in Netflix’s Halston. There’s a great scene in the first episode, that recreates the moment of discovery and creation of Halston’s signature tie dye kaftans of the late 1960s. These pieces of couture tie dye are so iconic that one is in the Metropolitan Museum of Art’s permanent collection. 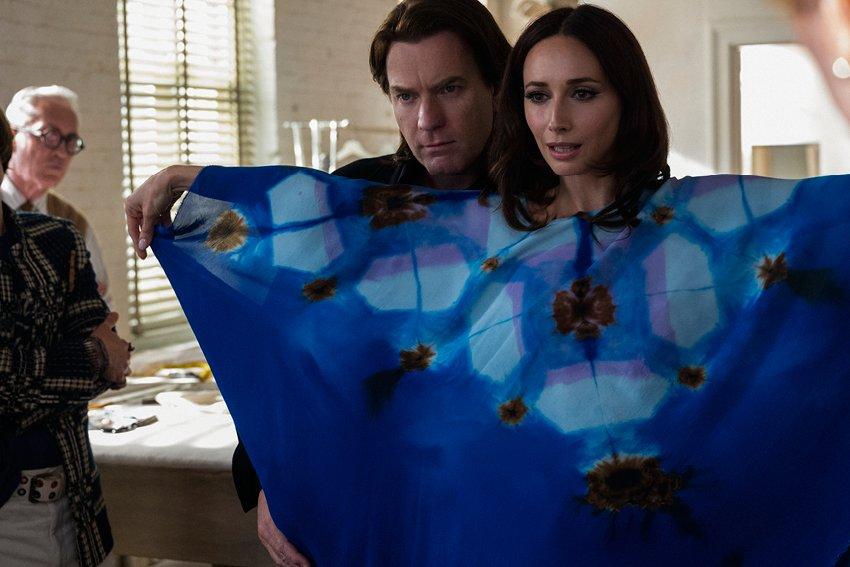 The most recent emergence of tie dye as a ‘trend’ was on the runways in 2019. Some attribute this to the sentiment of political peace that the pattern promotes. Excitingly, others interpret the trend as a shift in the fashion industry’s ethos; tie dye is associated with eco practices, tradition, and increasingly popular slow fashion… why not hop on board with the trend?!

A great example is Stella McCartney’s Spring/Summer 2019 Collection, which went all in with the inspiration of indigo resist dye techniques: 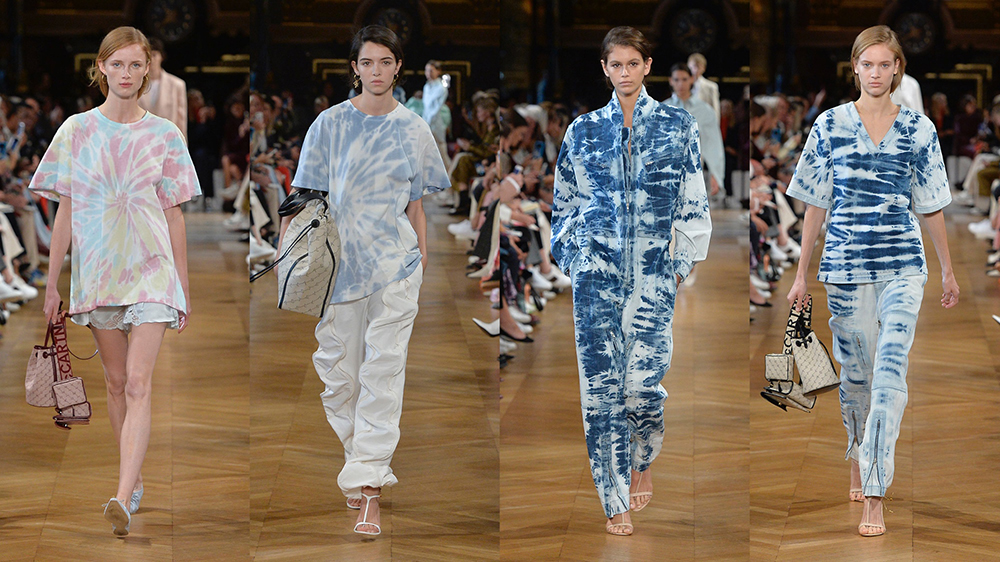 And of course, there’s our very own tie dye and shibori products at Indigowares:

You may have tried your hand at tie dye kits, or with products like Rit dye or Procion dye, with a basic technique. Whether you’ve gotten a taste for it, or even if you’re a total beginner, we want to share the techniques that we’ve created through natural indigo and historically founded techniques like Shibori with you!

Our Natural Indigo Dye Kit is the perfect place to start with this. Something that’s really special about this kit is the love and care we put into writing the instruction booklet. We wanted to make sure you have a resource that you can follow along with, and that will help you develop dyeing skills that you can expand on even further. After all, half the fun is the endless experimenting that’s possible! 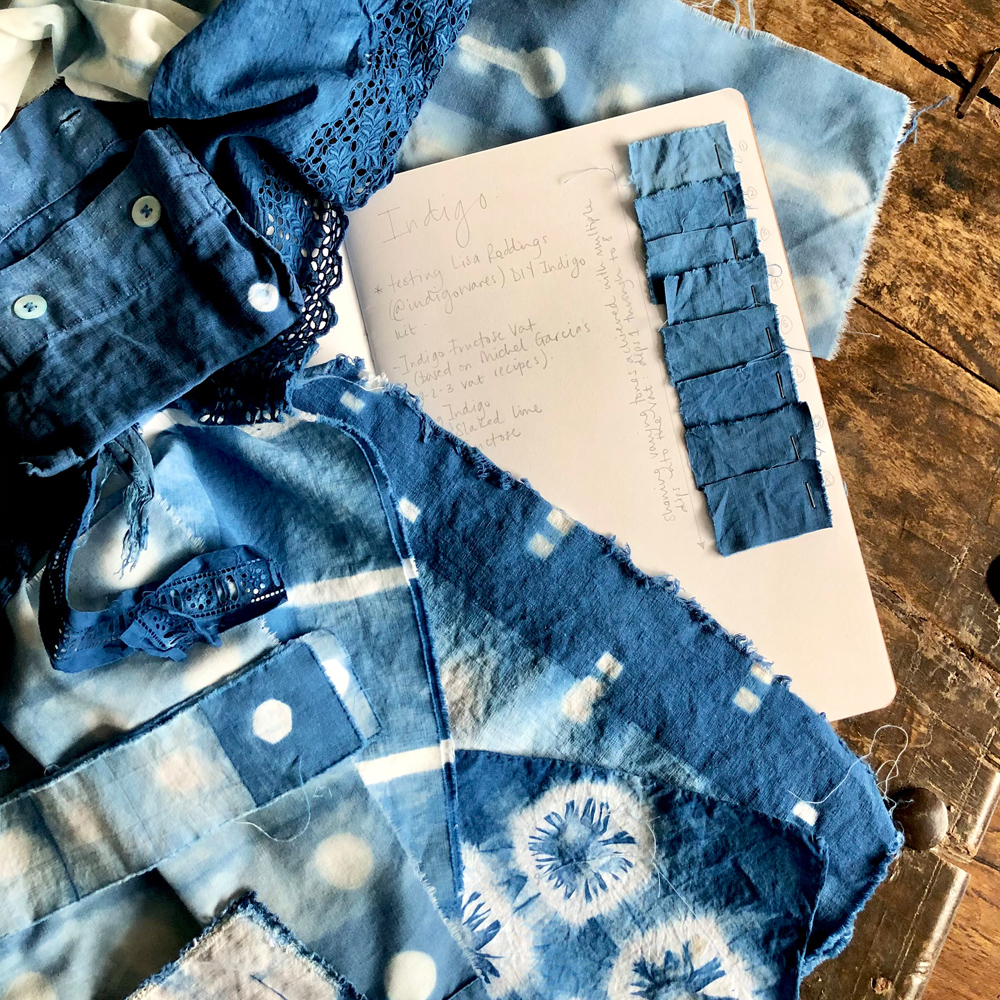 We’ve also created a completely unique collection that allows you to create your patterns on beautifully designed and crafted garments. With our recent Undyed collection, you’ll be able to create the patterns you dreamed of, on high end, fashionable and timeless garments. Un-dyed is a collection of neutral toned wardrobe essentials, entirely ready and worthy of your creations.

Now that you know the history, why not try your hand at tie dye? We hope you’ll catch the bug with our Natural Indigo Dye Kit, and fall in love with Indigo as much as we are!

That feeling when you finally catch up with work f

Sunday stitchery for you 🌈 Here’s a slice of

The reality of running your own business! Sometime

FRIYAY!! But it’s me and does the work actually

Kantha totes and where you can find them in the wi

Our latest dress for spring is coming to life. Cut

Indigowares will use your information you provide on this form to be in touch with you via The Blue News and to provide updates and marketing. By signing up I understand I'm opting in for promotional sales, marketing plus newsletters